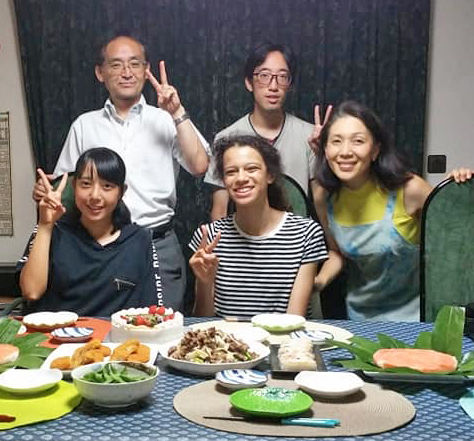 This coming fall will be one to remember for Skylar Davis '21. She'll be spending most of the first semester of her junior year in Japan, living with a host family and attending a high school in Tokyo. It won't be her first experience living and studying in Japan. Last summer, she spent six weeks based with a local family in Toyama in the center of Japan, going to school with Japanese peers through the Youth for Understanding (YFU) program.

Skylar's next adventure during the upcoming school year will be far longer and involve an even deeper immersion into Japanese language and culture – both of which have long been something of a passion for her. Before taking part in the YFU program last summer, she had been independently studying Japanese on a weekly basis with a private tutor for several years. Although speaking the local language wasn't a requirement for that program, Skylar found her ability to understand and be understood gave her a huge advantage and enriched the whole experience considerably. "It was satisfying to find that my effort to learn Japanese had paid off," she explained. "It allowed me to have some independence, to be able to explore on my own and choose where I wanted to go."

She described her time there last summer as "amazing." Her host family (pictured here with Skylar, center) was kind and welcoming. As she was able to read and speak some Japanese, her host parents were comfortable letting her ride a bike independently into the town center on a regular basis. She became something of a familiar sight to local residents. In the "100 Yen" store (the dollar store equivalent) near her house, she often chatted with the shopkeepers. When she went to buy baked goods, she said, "the local baker recognized me and gave me sweets!"

The three weeks she spent experiencing life at an international school inspired her to seek a future program – one where she'd be able to stay longer and get a deeper sense of life as a student in Japan.

The Council on International Educational Exchange (CIEE) – a non-profit study abroad and intercultural exchange organization – provided the ideal opportunity for her next venture, and Skylar applied to the program as soon as she heard about it. Having a minimum of one year of formal Japanese language instruction at the high-school or college level is a requirement for CIEE, and Skylar has continued to work hard to improve her fluency. Along with her private lessons, last year, she also took adult classes at the Japanese Language School on Friends' Central's City Avenue campus on Saturday mornings.

The CIEE "High School Abroad in Japan" webpage offers the following for prospective participants: "You'll discover the rich culture and history that Japan has to offer, both in class and through your own personal explorations. You'll advance your Japanese language skills through intensive study and casual conversation, and build practical, real-world skills that will serve you in college and beyond."

Skylar heads to Tokyo with fellow CIEE participants in August for 17 weeks, returning to the US at the end of December. She'll be studying at Seiritsu High School in Tokyo and will be matched with her new host family later in the summer. At Seiritsu High School, she'll be in classes with Japanese peers, but there will be tutors available to help her as an international student. "I'm hoping this will really push me to improve my Japanese in order to pass the classes and get good grades," Skylar shared.

When asked what she's most looking forward to about this upcoming adventure, Skylar responded, "So much – definitely that it's going to be a longer and deeper immersion. The big difference is that, last time, I was just away for a school summer break; now I'm going to be away for the first half of the school year." She's also looking forward to visiting her former host family, who are only a few hours from Tokyo and excited that she'll be returning to Japan. "I now have personal connections there; I feel I've almost made a second home for myself!"

We wish Skylar all the best and look forward to hearing all about her experience!