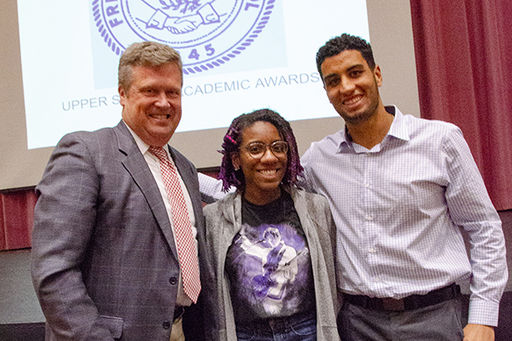 Celebrating Academic Achievements in the Upper School
May 20, 2019 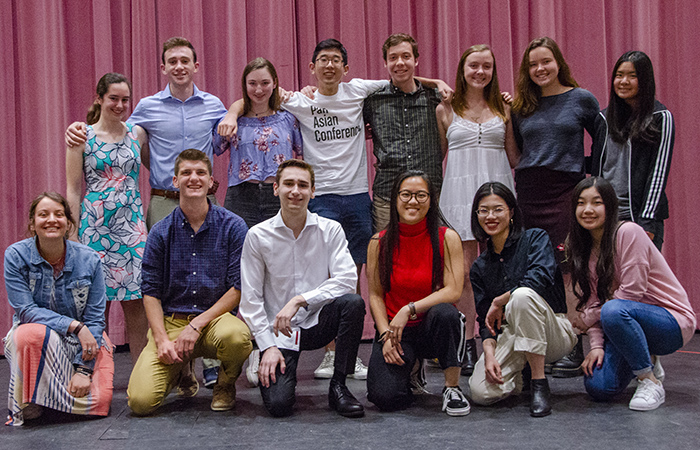 The World Language Award, given by the Language Department, recognizes juniors and seniors who have exhibited exceptional achievement on an advanced level and enthusiasm in their world language studies, was awarded to Anna Comstock, Ivy Epstein, Carolyn Kelly, Maranda Plunkett, Peter Salgado, and Kai Schenck.

The History Paper Prize, given by the History Department to highlight the best of the junior American History papers, was awarded to Nina Saligman.

The Science Award, presented by the faculty of the Science Department to a senior who has demonstrated excellence in scientific scholarship and achievement and has shown breadth of study across the science disciplines, was presented to Mingyu Zhou.

Sponsored by the English Department, The Poets and Playwrights Prize, which recognizes the work of poets and dramatists in our student community, was presented to Kalila Jones.

The Benjamin V. Ogden Memorial Award, created by the children of Benjamin Ogden, the first director of Friends’ Central’s summer day camp and P.E. teacher at Overbrook High School and Temple University, to recognize students who embody the spirit of Benjamin Ogden, whose well-roundedness has been an example to our community, was presented to Heather Adelsberg, Noah Condiff, Ben Kollender, Carson Lonner, Zak Loudini, and Maranda Plunkett.

The John H. McCollum Memorial Award, in honor of John H. McCollum, former English teacher and the first dean of the senior class, beloved by students who appreciated his honesty, his high expectations, and his willingness to listen, was established by the Home and School Association to honor students whose generosity of spirit, like McCollum’s, has touched the Friends’ Central community, whose warmth, wit, and openness to all has fostered collaboration instead of competition, and who have acted often behind-the-scenes, without drawing much attention to themselves, was presented to: Hannah Benjet, Zeeanne Choi, Lucas McGrann, David McKeever, Shelton Mercer, and Raanee Smith. 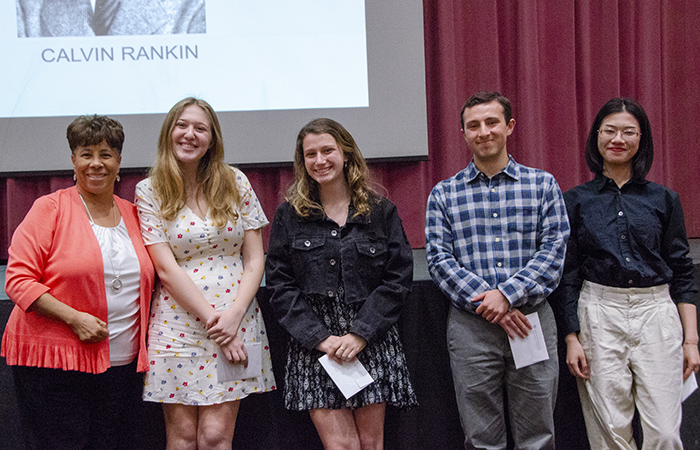 The Calvin H. Rankin, Jr. Memorial Award, given to those students who embody the spirit of Calvin Rankin, a 1943 graduate of Friends’ Central who is remembered for his sensitive spirit, his love of writing and music, and especially for his character, which combined gentleness with integrity, was presented to Sara Bergmann, Ivy Epstein, Ben Klein, Isabel Pereira-Lopez, and Mingyu Zhou.

The Leola Adelaide Smith Memorial Award, given to those students who embody the spirit of Leola Adelaide Smith, a 1974 graduate of Friends’ Central remembered for her dignity, integrity, her love of people, her talent in music and art, and for imbuing all of her activities with a sense of her presence as a member of the group, with an eye toward the whole group’s function, not only her own individual contribution, was presented to McKenna Blinman, Kristen Johnson, Kalila Jones, Sophia Radford, and Gavin Sultan.

The 1845 Award is an honor conferred by the graduating Class and the Upper School faculty on two members of the Class of 2019 who embody the characteristics displayed in Friends' Central's school seal. These characteristics are: as reflected in the image of a balance scale, a classmate with a commitment to fairness and justice; as reflected in the image of a bird in flight with an olive branch, a peer who has taken thoughtful risks, and broadened our understanding of peace; as reflected in the clasping hands, a friend who “lets their life speak,” providing a pattern for the lifelong relationships. The 1845 Award was presented by Head of School Craig Sellers to Kalila Jones and Zakaria Loudini.