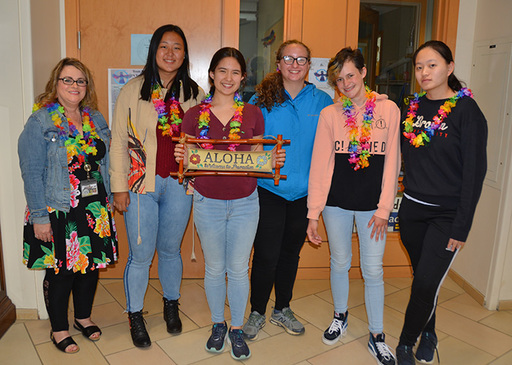 A team of Friends’ Central School students has been selected by the Pulsar Search Collaboratory to present at the American Astronomical Society (AAS) Meeting in Hawai’i this January.

Called “the Super Bowl of Astronomy,” the Meeting of the American Astronomical Society (AAS) is the 235th meeting in the history of the organization. AAS members and colleagues come from across the globe to learn and to share their latest research with an audience of astronomers and space scientists at all career stages, as well as a select group of college and high school students. These students from Friends’ Central, called Team Radio Phoenix, are five of the 26 individuals selected on 11 teams nationwide to participate in the AAS meeting in January. Team Radio Phoenix is comprised of seniors Sofia Diaz, Elisabeth Forsyth, and Alex Wang and juniors Ha-Eun Choi and Harper Will. Pulsar Search Collaboratory was thrilled to announce that they also will be supporting the Friends' Central students' travel to and from Hawai'i for the AAS Meeting.

The teams were chosen based on their written abstract and if they (each) could evaluate 100 pulsar data sets by October 15. Each pulsar data set contains 30 plots, which students must examine and judge whether or not the radio signals in the plot are random noise, radio frequency interference from sources like cell phones and microwave ovens, or authentic pulsar signals. This means that each student had to look at 3,000 plots between September 1 and October 15. For FCS’s Team Radio Phoenix, that meant 15,000 plots!

In Team Radio Phoenix’s written abstract, entitled “A Multiwavelength Study of Binary Pulsars: An Effort to Identify Companions,” the students explain that a subset of pulsars is spinning extra fast--thousands of times per second ("millisecond pulsars"). Astrophysicists think the reason for the spin-up is that there is a companion star responsible, and the two stars are potentially passing material back and forth. In many of these cases, though, the companion theorized to be there hasn't been spotted yet. Team Radio Phoenix is working on a project to scrutinize infrared images of the regions near the pulsars to look for the stellar companions to the pulsars. Stars have certain infrared properties that pulsars do not. Team member Harper Will ’21 said, “My fellow teammates and I worked hard to create a research proposal that was both captivating and adventurous. We were overjoyed the day we found out our proposal had been selected, and now we are meeting regularly to work on our project. This is an opportunity I’m so grateful for.”

Team Radio Phoenix began in fall 2017, driven by five students who were interested in astronomy, and in collaboration with physics teacher Deborah Skapik, they have become members of the Pulsar Search Collaboratory (PSC). To become PSC members, the students participate in an online course, led by world-renowned astronomers Dr. Maura McLaughlin and Dr. Duncan Lorimer (who discovered Fast Radio Bursts), that teaches them about pulsar science and radio astronomy to prepare them to become competent researchers. After they are trained, students gain access to radio astronomy data taken at the Green Bank Telescope, a 17 million pound telescope with a dish the size of two football fields that collects and amplifies the tiny signals received from pulsars.

Pulsar astronomy is a big data science, with three gigabytes of data generated from just 2 1/2 minutes of observing new data (not yet analyzed by other scientists) with the Green Bank Telescope (GBT). The PSC online training prepares students to be diligent, observant researchers who can discover new pulsars, rule out interference, sift through an enormous amount of data, make new and significant scientific discoveries, and write papers that are published in scientific journals, just as astronomers, graduate students, and undergraduate students do.

In the last year, the five students (all girls) in Team Radio Phoenix have been on a roll. Last May, three TRP members were three of only sixteen students nationwide who attended a capstone event for the Pulsar Search Collaboratory, now in its 11th year, at West Virginia University. To qualify, each of them had to evaluate at least 50 data sets containing about 30 plots each. All three Friends’ Central student representatives gave presentations on their work, one FCS student was approached about copyrighting her work (a board game to help train new students to identify pulsar signatures in data), and another was asked to digitize her pulsar art to be shared. They attended professional research presentations on everything from white dwarfs to gravitational waves, they toured physics and biology labs, and they enjoyed a career panel of astronomers, professors, and scientists.

Harper Will explained what she enjoys most and what led her to joining Team Radio Phoenix. “I joined Team Radio Phoenix during my first year at Friends’ Central because I am an avid science geek and had already been enjoying my physics class with Dr. Skapik … right from the start, I loved the research we were doing. I felt like I was a part of real, actual science (which, of course, I was and still am). At the end of my first year, our team went to West Virginia University for an event with other Pulsar Search Collaboratory students from all over the US. We got to speak with the astronomers we had worked with online and see their work in action. This event was what I have most enjoyed about the PSC so far. It provided me with an amazing opportunity to form new friendships with those who shared my interest in astrophysics.”

The passion each of the five students (so far!) on Team Radio Phoenix has for science and astronomy is palpable. Co-leader of Team Radio Phoenix Sofia Diaz ’20 said, “This team has been one of the most incredible experiences of my high school career. It has given us the opportunity to do real research before we even graduate high school--an opportunity many students don’t get until they are undergraduates, if even then. Being accepted to present at the AAS Conference means so much to us, and I feel honored to be a part of this group of girls in STEM. I am so proud of how hard everyone on my team has worked through these past four years, and I am excited to get the opportunity to share our research alongside real astronomers from around the world. After I graduate, I will remain very much a part of the Pulsar Search Collaboratory network and continue the research alongside these girls for as long as I can. It is an experience I will never forget.”

Faculty advisor and Upper School physics teacher Deborah Skapik cannot say enough about this remarkable team. “I am very proud of this inspirational team. The way they work together is almost magical, rising above collaboration to something impossible to capture in words,” Skapik shared. “Each young woman brings unique talents to the table which, when combined, results in an outstanding product.  Doing research together as a team like this is akin to playing in an orchestra, where the sound of each instrument is distinct, but blends with the others to create a symphony. Yesterday, we were raking through a list of millisecond pulsars to identify candidates which might have another object orbiting them. One student was busily manipulating the spreadsheet, one was recording our process for repeatability, one was journaling, one was pulling up images at multiple wavelengths to investigate, and one was doing mathematical manipulation!”

Co-leader Elisabeth Forsyth ’20 has been a member of Team Radio Phoenix for two years, and in that time, she has forged a bond with her teammates and has felt comfortable to step up and become a leader and embrace her role in STEM. “In these four other girls, I’ve found almost a family. The group has to be by far one of the most supportive I’ve ever been a part of,” shared Forsyth. “I’ve also found a place where I feel safe to take more of a leadership role. I’m naturally shy, but this group has helped me get out of my shell … has helped me embrace who I am as a woman in the STEM field and also find a group that will support me even outside of that. And we’ve been chosen to go to Hawaii! And on top of that, the reason we’re going is because we get to do actual genuine research, which is something so few other high school students can say they get to do. And our research, while it might not make sense to many, is super exciting for us, and I’m excited to see where it takes us.”