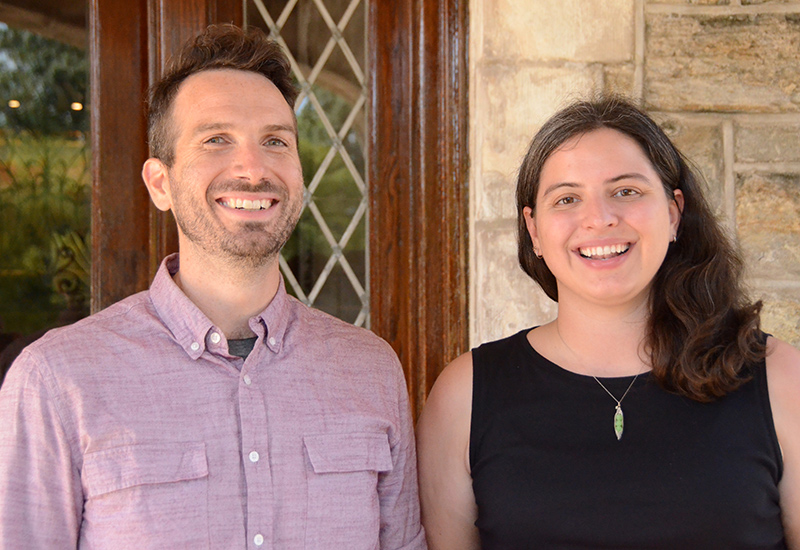 Anna and Michael worked with William Mongan in the Drexel Wireless System’s Lab, looking at using knit Radio Frequency Identification (RFID) antennas in smart garments called Belly Bands to measure respiration in infants, particularly premature infants, and perinatal women. The Belly Bands’ electrical properties change as they expand, and the changes can be measured and translated into contractions or respiration without wires or batteries, creating a more comfortable, non-invasive form of monitoring.

Anna explained, “Michael and I helped the team at Drexel implement a new form of signal processing on data obtained by the belly band. It included a knitted radio frequency antenna that connects to a radio frequency identification chip, similar to what is found in your EZ-Pass or your credit/debit card.”

Since the belly bands would expand, the antennae size would warp and change its frequency, affecting the power of the signal sent back to the reader. The goal would be to use two chips – one on the belly band and one in another location, like the shoulder, not affected by the breathing. Michael shared that one of the issues was the data stream from the belly band, particularly extracting the signal from the noise. He described, “One chip would have the signal and noise produced by the breathing. The other chip would produce just the signal. Then we could hopefully extract the noise.”

For both Anna and Michael, this project was an incredibly rewarding way to spend their summer. Michael said, “I’m absolutely glad I participated, and I would recommend it to any teacher. You don’t have to be a computer science teacher. It was incredibly satisfying, just knowing that the work was meaningful, taking place in a real lab needing real solutions.”

Anna echoed Michael’s sentiments, saying, “The exciting part was they were offering a real research lab experience, and it was something cutting-edge that I could bring back to my students. It also gave me the motivation and confidence to bring coding into my physics class.”

Both Michael and Anna will be incorporating this project into their classes – Michael with his second semester computer science class, and Anna with her physics class.