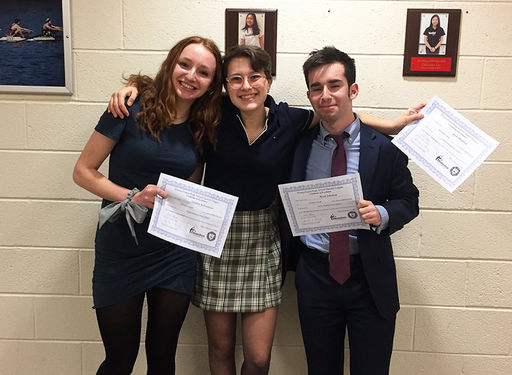 Out of a field of 15 teams - including 10 public schools - Friends’ Central’s stellar debate team of juniors Jade Halpern, Ryan Jokelson, and Lindsey Schweitzer, won the PHSSL District 10 Parliamentary Debate Tournament on February 13, 2019. They are now heading to the State tournament, which takes place the weekend of March 15 at Bloomsburg University.

Facing up against large public schools like Lower Merion, Harriton, Radnor, and Marple Newtown, Friends’ Central Upper School students Jade Halpern ’20, Ryan Jokelson ’20, and Lindsey Schweitzer ’20 proved more than up to the challenge, taking home the District 10 title for FCS. Having participated in Debate all three years of their high school careers so far, Jade, Ryan, and Lindsey really enjoy working and competing together. Jade shares, “I enjoy the Debate community, getting to work with Ryan and Lindsey, having the opportunity to be a leader, helping others to be their best selves, and learning new topics. I wouldn’t otherwise have known or cared about things like the power grid or this year’s topic of corporate donations to political campaigns, but I think I learned a lot, and it definitely has gotten me more invested in our electoral system.” A significant portion of what Ryan enjoys about Debate is pretty simple: “I really like arguing.” He also doesn’t let his on views on the topics in question get in the way. “We did three debates at districts – one time we were in favor, one time opposed, and one time was impromptu where we had 10 minutes to prepare,” Ryan explains. “I don’t let my personal opinion cloud my thoughts when forming an argument either way.”

Though they had qualified for states last year, the team was surprised to have won the district tournament this year. “I was surprised and excited when we found out we won,” says Jade. “Our best debates are the ones where we get challenged and have to find new ways to think about, and those are often the ones we feel least confident but end up performing well in.”

Two other teams from District 10 will join Friends’ Central, and a total of about 50 teams will compete at the State Tournament on March 10 at Bloomsburg University. Good luck, Jade, Ryan, and Lindsey!