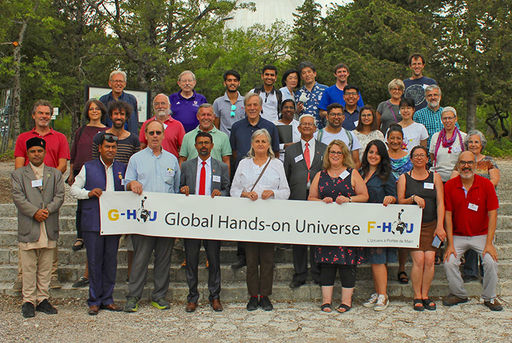 In an effort to enhance her teaching of astronomy, last year, Friends’ Central Physics Teacher Debbie Skapik became a member of the Global Hand-on Universe (GHOU), and this past summer, she attended the GHOU Conference in Provence, France, thanks to a Hendrie Stipend, a fund established by an FCS alumnus to help faculty enhance the math and science programs at Friends’ Central.

GHOU is a non-profit organization that works to train educators on using modern tools and resources for teaching science, to engage students in scientific projects internationally, and to encourage the teaching of interactive projects among schools worldwide.

Shortly after becoming a GHOU member, Debbie received a call from Carl Pennypacker, a celebrity in the world of astronomy research, who was thrilled to see that Debbie, a high school teacher, had become a member. Pennypacker, a supernova research astronomer at the University of California, Berkeley, Prix Jules Janssen Award winner, and Gruber Prize in Cosmology co-winner, began the Hands-on Universe project back in the 1990s. He first invited some astronomers and educators to a meeting in Arizona to share ideas about improving astronomy education, particularly how making telescopes and telescope images available to students and teachers was crucial. When other countries became involved, the Hands-on Universe became the Global Hands-on Universe. 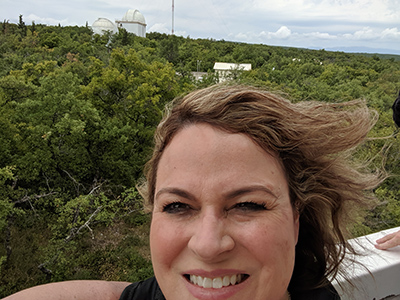 Debbie says that her GHOU experience in France was “life-changing. As you scan the landscape in the observatory in Provence - 300 out of 365 nights are clear - you can see for miles just how stunning the location is,” Debbie shared. “That site in Provence was chosen because the telescope in that location was the one used to detect the first exoplanet, 51 Pegasus (51 peg b), in 1995.”

Part of the mission of GHOU is to engage educators and students in a real global cooperation. Debbie explained, “Everyone cares about people, the teaching of astronomy in real concrete ways, and paying attention to the global community and the entire planet. That’s what I was so excited about - to be with these educators from all over the world and to be able to take this knowledge and bring it back to our astronomy research students at FCS.”

In fall 2017, Debbie and some Upper School students began two astronomy research teams - Team Radio Phoenix and FAST (Friends’ Central Asteroid Team). Team Radio Phoenix, comprised of five students (all girls), searches the sky for pulsars as part of the Pulsar Search Collaboratory (PSC). Debbie shared an exciting update about Team Radio Phoenix: “We are sending in an abstract to the PSC this week, and, if selected, the PSC may send our team to the American Astronomical Society meeting in January (in Hawai'i!). The team is on fire right now, each one trying to analyze 100 pulsar data sets by October 15.” In FAST (Friends' Central Asteroid Team), the four Upper School students in this group look for asteroids through IASC, the International Asteroid Search Collaborative. to date, FAST has discovered 44 preliminary asteroid candidates. Debbie said, “When these asteroids are observed two more times and their orbits are confirmed by the Minor Planet Center, our students will have the opportunity to name them! The process can take up to six years, though.” 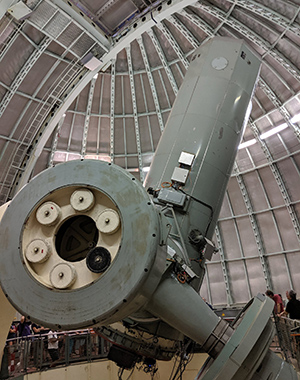 Last May, three students in Team Radio Phoenix - Ha-Eun Choi, Harper Will, and Alex Wang - were three of only sixteen students nationwide who attended a capstone event for the Pulsar Search Collaboratory, now in its 11th year, at West Virginia University. To qualify, each of them had to evaluate at least 50 data sets - no small feat, as each set contains about 30 plots. The person who discovered Fast Radio Bursts (FRBs), Dr. Duncan Lorimer, personally awarded each of our students a certificate and gave them a book. Our three Upper School student representatives gave presentations on their work, and Harper was approached about copyrighting her work (a board game to help train new students to identify pulsar signatures in data), while Alex was asked to digitize her pulsar art to be shared. In addition to this grueling poster session, they attended professional research presentations on everything from white dwarfs to gravitational waves, a career panel and toured physics and biology labs. Debbie explained, “All of this is work they get no academic credit for and little community recognition. They are doing important, real science research, and I am very proud of them.”

Debbie wants to not only bring what she’s learned to Friends’ Central’s astronomy teams and programs but also to bring to FCS or the greater Philadelphia region an exciting event she learned about that took place in Japan last year - a Solar System walk, which she calls “one of the most profound takeaways from the conference.” Mitaka, a city right outside Tokyo, Japan, transformed their community into a map of the solar system. Debbie described, “GHOU members from Japan got the entire city excited about this project, where they divided the city into different zones of the solar system. Even local businesses got into it. That’s definitely something we could do on our campuses, in Lower Merion, and even in the City of Philadelphia.”

“This stipend program is so valuable, and I’m very grateful. I can take this knowledge and, hopefully, bring the connections I’ve made and the programs I’ve experienced to our community and around the world. It would not have been possible without the stipend program and these amazing experiences.”