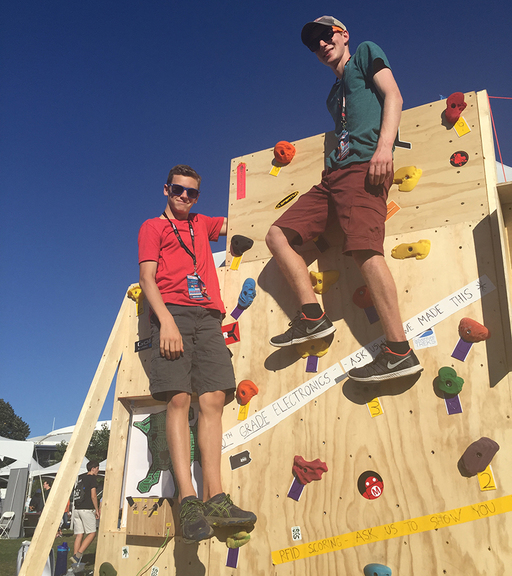 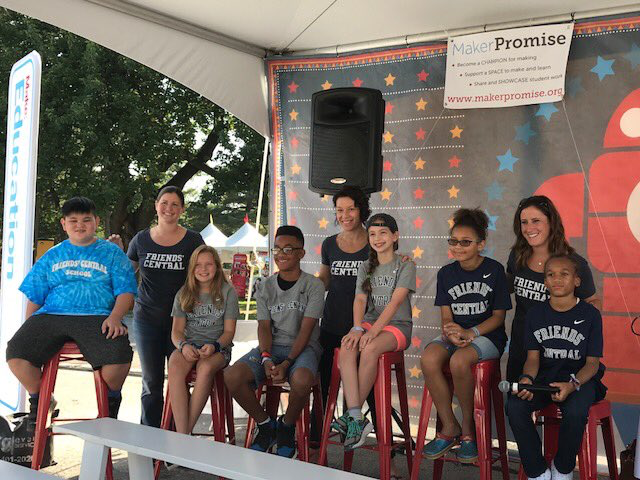 Friends’ Central School continues to remain at the forefront of cutting-edge Maker Education. At the World Maker Faire in New York City in September, Friends’ Central voices and projects were felt in multiple arenas. Lower and Middle School students and faculty gave a riveting multimedia demonstration of their State Fair project and their If the World Were a Village projects, and two Upper School students presented their show-stopping project – the RFiClimb, a wireless rock climbing wall with a scoring system that used RFiD and Bluetooth to show the climber’s progress – winning Best in Class and a number of Editors’ Awards.

Brie Daley, Lower School Light Lab Director, shares, “I was delighted when I received word that we were selected to present at this year’s World Maker Faire. I know firsthand that our FCS students have plenty to share about the positive impact of Maker Ed.” Last year’s fourth graders shared their State Fair projects, which were created during their study of US geography in which they each chose a state to research and brainstormed a unique maker project to create in order to demonstrate their learning. Fifth graders shared the projects they made while reading If the World Were a Village in math, in which they used global statistics about education, age, religion, and other subtopics to develop a project plan that would both demonstrate what they learned and point towards solutions to global challenges and inequities.

Both projects had full access to the studios and equipment in the Lower School Light Lab. They were also given a Maker Mentor - a community adult with a skillset that could support them in the development of their project. From a working amusement park for Maryland in the fourth grade project to an interactive language board and a working water wheel in the fifth grade project, the range of projects was extraordinary, and their presentation of these projects at the Maker Faire was outstanding. Daley explains, “I was especially taken with how our students shared the setbacks in their maker projects. Each student came alive while reflecting on what was truly hard. Their failures didn’t feel negative - they couldn't wait to tackle them a new way. Our students grew socially and emotionally while also engaging in highly academic content. I am in awe of my students’ bravery in sharing this experience on the stage at NY Maker Faire. I hope their message inspires others to explore Maker Ed and encourages teachers to increase the amount of choice students have in creating things which demonstrate deep learning.” 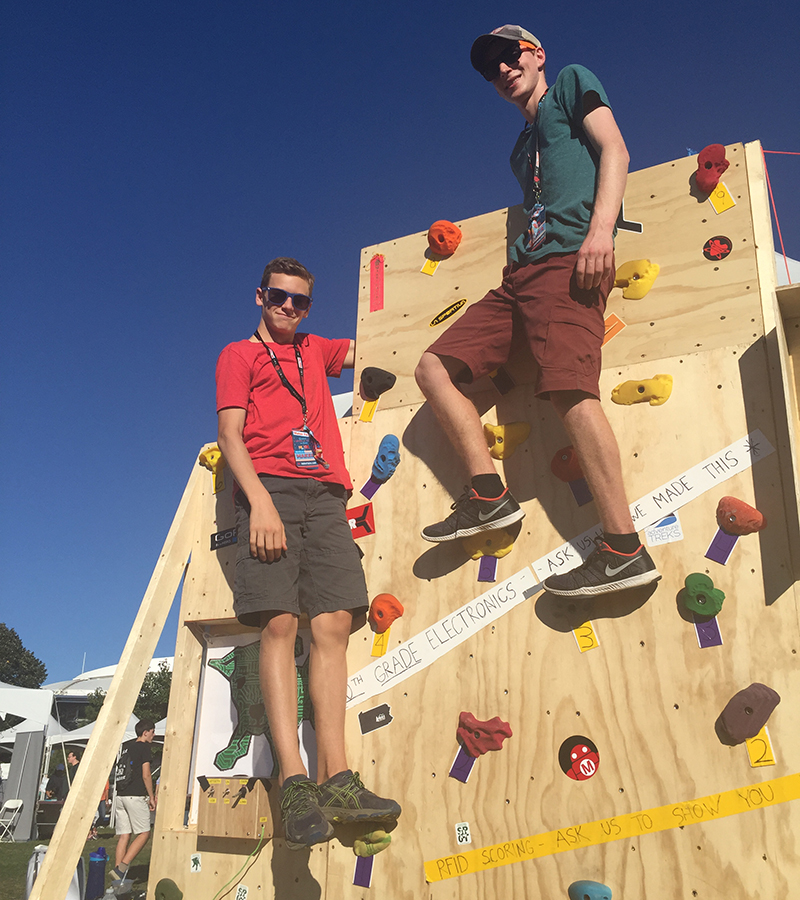 For the second year in a row, Upper School students Ben Lehrer ’20 and Jonathan Roach ’20 displayed projects at the Maker Faire, winning Best in Class and a number of Editors’ Awards for their exciting, interactive project – an RFiD rock climbing wall. Though the construction of the rock wall and scoreboard only took a few days, the pair worked on the project, particularly the many lines of code, for about a year. Lehrer explains, “Most of the time and effort was put into making the hand units and writing the 1500 lines of Arduino code. These two things took us about the entire year to perfect.”

Having participated in the Maker Faire last year, where they presented their Arduino Sax, was a significant advantage and really helped prepare Lehrer and Roach for this year’s Faire. Roach shares, “It was really awesome to be a part of such a huge event. Last year, we had no idea what to expect, so we were in some ways unprepared. Because we had experience, this year was a lot easier, and since we had such a great time last year, it was a no-brainer that we would be back. We actually came up with the idea for the RFiClimb on the way home from the 2016 Faire.” Makerspace Director Michael Darfler shares, “The challenge [in Maker Ed] is seeing the potential at the beginning and having the tenacity to see it through to the finished project. Ben and Jonathan’s maturity and their ability to work through difficulty is inspiring. Many students would have given up months ago. It’s truly commendable what they were able to accomplish this year.”

In the last six years, Friends’ Central’s Makerspace has become a repository of creativity for Middle and Upper School student makers, bringing the Maker experience to an even higher level and making it more accessible to a greater number of students and faculty. Darfler shares his insight on Maker Ed at Friends’ Central, “We are moving in a direction that is tangible and personal – people are creating extensions of themselves – maker experience is rooted in personal experience, which makes it even more powerful.” Lehrer and Roach affirmed this connection as it relates to their Maker Faire projects. “Working in an environment made by others with similar interests helps inspire creativity and facilitate problem solving. During the countless hours we spent in the Makerspace trying to solve one problem for days on end, Mr. Thomas and Mr. Darfler always encouraged us to keep trying. Although the Maker Faire was exciting, it wasn’t why we made either project; we really enjoy spending our free time making. Probably the best moments in the process were those when we realized that a piece of the project finally worked.”

Click here to see Ben and Jonathan's RFiClimb in action at the World Maker Faire.