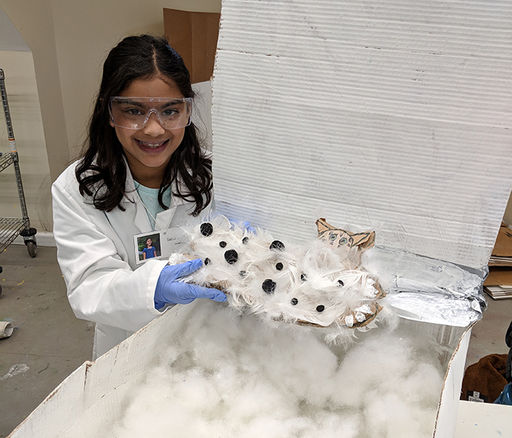 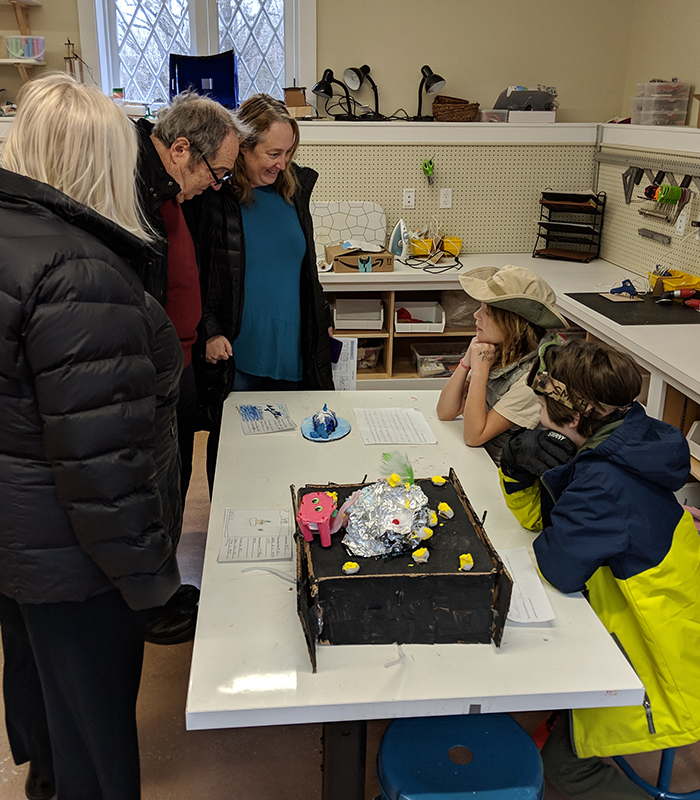 Where can you find animals like the “zeal,” the “frosttooth tiger,” the “white tiger slizard,” and the “butterchimp?” The Third Grade Zoo! On Wednesday, February 27, third graders took over the Light Lab, transforming each of its four studios into an Antarctic wonderland.

For their Fall Project, the third grade studied Antarctica, learning about the climate, geography, wildlife, and population of the country through a multitude of hands-on activities and explorations. Students discovered that animals have to adapt to the cold, severe climate in order to survive in Antarctica. Third grade teacher Taylor Salvitti explains, “While discussing climate and wildlife, we introduced students to the concept of animal adaptations and how very few plants and animals on Antarctica can manage to survive in the harsh climate there. Once students had an understanding of what animals would need to survive on Antarctica, they began creating their own animals that could potentially live on the continent.” Led by Salvitti, fellow third grade teacher Joe Dubb, and Light Lab Director Brie Daley, students visited the Light Lab twice a week from December through February, using an array of materials to construct their new species. 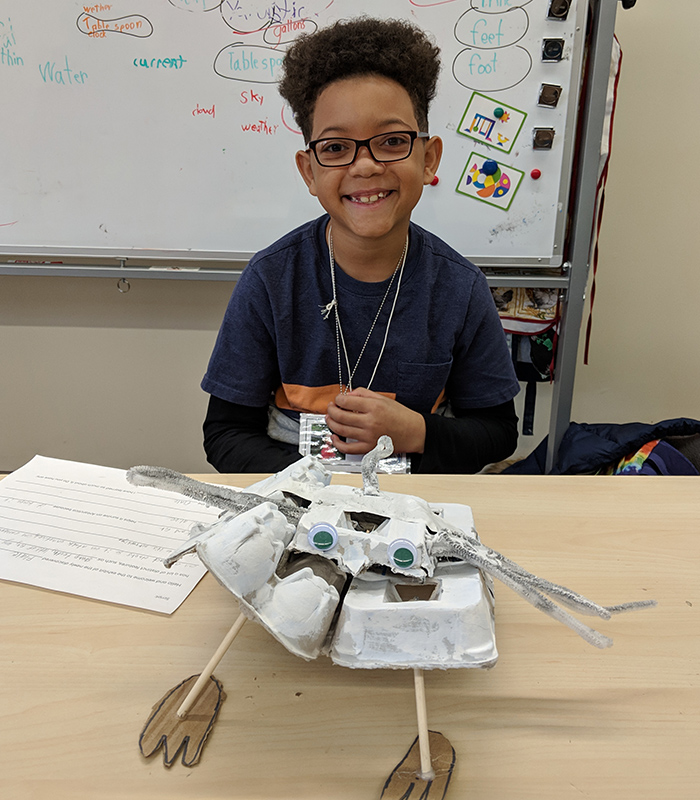 Familiar animals from multiple parts of the world were chosen and then modified to ensure survival in Antarctica’s climate. For example, the “zeal,” created by Suheir, was a zebra/seal hybrid, with the stripes of a zebra and the hair of a seal, as well as pipe cleaners for whiskers. Suheir shares some of the process, “We studied about our animal first, and then we had to research it and come up with fun facts. Then we drew what it would look like before we made it.” To create her zeal, Suheir says, “I used decoration tape, cardboard tape, feathers, google eyes, hot glue, pipe cleaners and yarn.”

Teddy illustrates some of the challenges of inhabiting a place like Antarctica. “It’s a very cold, hard place to live, and animals need all this special stuff to even live there,” he says. “They need blubber if they swim or a furry body. It’s mostly just animals who live there, not humans, because it’s so cold.” 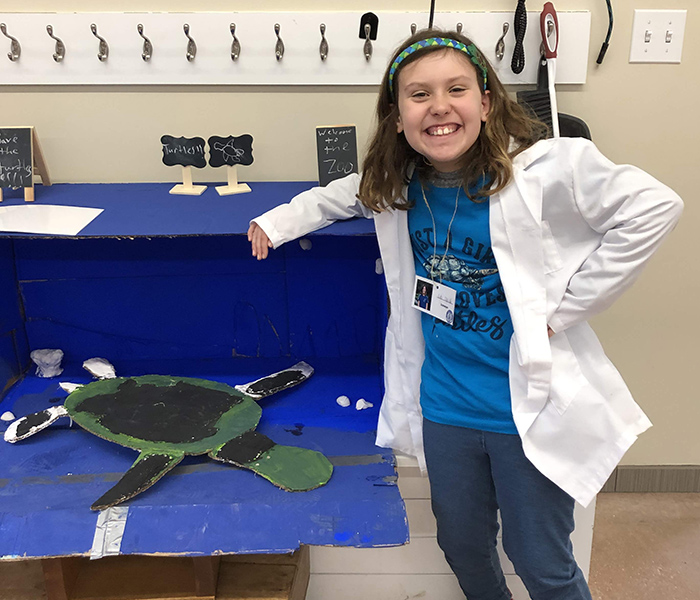 The culminating project was the Zoo itself, where parents, teachers, and students were able to go from room to room to see the new species. Salvitti shares, “We welcomed parents and FCS classes into the Light Lab to visit the 35 exhibits of the new creatures. Students dressed up in costume and prepared a short script to welcome visitors to their exhibit and tell all about their animal.”

Students were able to truly let their creativity and problem-solving skills shine. From learning about the country of Antarctica to choosing and creating their animal and their script, students used a variety of cross-curricular skills for this project – including reading, researching, writing, problem-solving, and visual and performing arts – through the process of planning and building their projects. After students created their animals, they wrote a scientific journal entry announcing the discovery of the new species.

Kiki explains that she came up with her animal, the “Antarctic sea turtle,” because “the sea turtle is my favorite animal, and I got to know even more about it after I did my research. It had to adapt to Antarctica, so I had to make changes to its DNA.” Ava shares what really brought the zoo to life. “When we were done making the Zoo, to make it realistic, we made a map to describe which animals were on which floor and which room,” she says. “We also made name tags, and to make it even more realistic, we dressed up into costumes.” 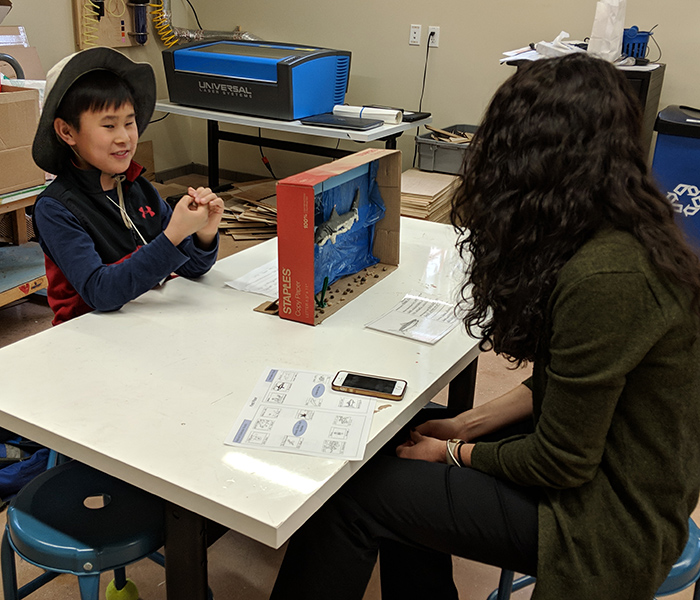 Over the more than two-month project, the third graders learned many different things, about Antarctica and its inhabitants. Suheir explains, “I’ve learned a lot about the different type of species - the penguins stick up for each other, and with the seals, the Mom makes sure the baby is safe. They care about each other just like we do.”